The Trouble With Chris Chibnall

Chris Chibnall's writing for Doctor Who has generally been of poor quality. Dinosaurs on a Spaceship was basically silly. It was never explained why The Doctor would want to get together a posse including Nefertiti and a big game hunter (people who kill for pleasure aren't The Doctor's usual choice of friends), nor why Nefertiti would chose to elope with the big game hunter (who seemed the sort of man who'd treat a woman like another trophy) at the end. The Power of Three started with an interesting premise (the Slow Invasion), but ironically the ending was rushed - The Doctor just waved the Sonic Screwdriver at a control panel and everything was all right. 42 revolved around a gimmick and doesn't stick in the mind. Even his best story, The Hungy Earth / Cold Blood was a by the numbers Silurian story (human activity awakes the Silurians, they want to reclaim their planet, The Doctor attempts to broker a peace, negotiations are botched, Silurians forced back into hibernation) with no original ideas in it.

He was even worse as the showrunner on Torchwood, the "adult" (as in very, very childish) spin-off from Doctor Who which followed the misadventures of an alien-hunting squad so top secret that everybody in Cardiff knew who they were, apart from the heroine's boyfriend. Said heroine was granted immunity from character development, as this was a terminal disease in Torchwood. The show never really found a tone that worked. Two episodes written by Chibnall personally made you wish you had a vial of Retcon handy. Countrycide was a nasty cannibal hillbillies story, transferred to Wales. Cyberwoman's premise contained a massive plot hole - Ianto Jones has supposedly smuggled a cyberconversion unit containing his partially-converted girlfriend (this was before Ianto was gay) into the Torchwood Hub without anybody noticing. Even worse, while Doctor Who consistently portrays cyberconversion as a painful and dehumanising process, Torchwood portrayed it as fetish.

WARNING: YOU CANNOT UNSEE THIS 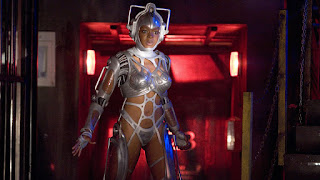 I did warn you.

Chibnall's defenders will say, "But Broadchurch was good." Well, it was if you like relentlessly depressing contemporary crime dramas. But in terms of tone, story, setting and intended audience, Broadchurch has nothing in common with Doctor Who. It seems that what he's best at writing is stuff that's nothing like Doctor Who at all.

More relevant is Camelot, which I don't think was a great success. I only saw one or two episodes, but the writing on it didn't seem that great. One thing I do remember is that one character (I think it was Guinevere) was introduced in a dream sequence in which she was seen dancing naked on a beach for no readily apparent reason.

So, when this second-rate writer, with a history of objectifying women, is made showrunner on Doctor Who, what does he do to make people love him? He resorts to gimmicks, of course, and his chosen gimmick in the unfortunate Josie Whittaker. She faces the prospect of having to carry an impossible burden of expectations while struggling with ropy scripts and misjudged tone, and possibly an inappropriate costume. It seems like the Tardis is taking us back to 1984.

When Colin Baker took the role, he wanted to portray a dark and edgy Doctor, something along the lines of Peter Capaldi's portrayal. However, the writing team at the time weren't up to the job, and interpreted it as brash, unlikable, and prone to dangerous mood swings. The Twin Dilemma is one of the few stories that can claim to be anywhere near as bad as Love & Monsters. Few of Colin Baker's stories were any good, but instead of laying the responsibility for this with John Nathan turner, where it belonged, the BBC made a scapegoat of Colin Baker, and sacked him. It didn't really help, and while some better writers came along later, Doctor Who was cancelled in 1989.

That's why I've started a petition to remove Chris Chibnall. Please sign it.

Emily's recommendations for The Fantastical Devices of Pete the Mad Scientist